Francesco Molinari was the model of consistency on his way to winning the claret jug, becoming the first Italian major champion ever.

The Italian was the last man standing after a thrilling final round at Carnoustie.

And as Tiger Woods, Rory McIlroy and Jordan Spieth all found their troubles, Molinari was a model of calm consistency.

At no point during a fantastic final round with two birdies and no bogeys did he ever lose control of his golf ball.

The former Nike staffer has gradually switched into mostly TaylorMade gear over the past couple of years with a few exceptions.

Molinari is regarded as being one of the most consistent drivers of the ball hitting around 70 per cent of fairways with his TaylorMade M4 driver.

We had seen him using the M1 model up until the M4 was released at the start of the year.

He then moves into the P750 model which are one of the most popular among European and PGA Tour players.

Molinari has the TaylorMade Milled Grind wedges  including the Hi-Toe 60˚ which the likes of Rory McIlroy, Jon Rahm and Dustin Johnson are using.

After signing a deal with Bettinardi at the start of 2018, Molinari had put their BB56 model into play but made a switch at the Players Championship.

The model he used to win at both Wentworth and the Quicken Loans National, and now The Open, is the Dass BBZero…

Despite a bag full of TaylorMade clubs, Molinari opts for the Titleist Pro V1x golf ball.

Driver: TaylorMade M4 8.5* (Mitsubishi Tensei White 60x) – Click the link to play the same driver shaft as the 2018 champion golfer of the year ! 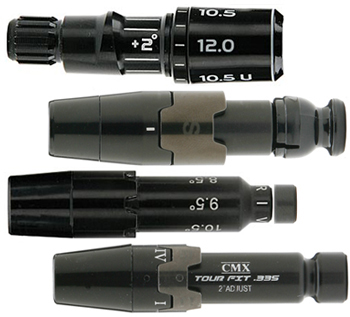 Over the last ten years the evolution of shaft adaptors has made the process of testing golf shafts for the average golfer far easier than back in the days of going to your local professional and having him build a complete new driver taking up valuable time that would otherwise be spent on the golf course. All major manufacturers offer different types of adaptor ferrules and the technology used varies from one manufacturer to the next. In 2015 Clubconex introduced the uni fit golf adaptor. This adaptor revolutionised the golf industry further by making it possible to fit any head to any shaft using the uni fit system. Adaptors are manufactured in different tip sizes to fit shafts with the matching diameter. The most popular tip size for the majority of adaptors is .335 tip this being because the majority of shafts produced today are .335 in diameter.

Adaptors have become the standard to any golfer who knows anything about equipment in today’s game and they have made the process of testing shafts much more fun for all who play the game.

At clicks4sticks We stock a variety of adaptors from all manufacturers at great prices so check us out and let us help you adapt your game. The Tour AD DI range utilises premium, aerospace quality 50t carbon-fiber materials to provide the best performing shaft available. The softer mid-section bend profile of the Tour AD DI allows the player to load the shaft properly, yet it maintains a firm enough tip section through IMPACT promoting a high launch and low spin ball flight condition.  The result, the Tour AD DI delivers players to the next level in shaft performance and will create a “DEEP IMPACT” on your game! This shaft is played by a number of the games top players including :

Visit us @ http://www.clicks4sticks.co.uk to order your Tour AD DI shaft today and create a DEEP IMPACT on your game ! From my experience within the game of golf and especially at the amateur level, the letter on the underside of a golf  shaft has always been of the utmost importance. Its almost as if a golfers ego depends on the flex of his driver shaft coupled with the self proclaimed 130mph club head speed  he can generate. Now, playing an X flex driver shaft may make you feel like ‘the big dog’ but the question is… what does it do for your golf game ?

what is a shaft flex ? Shaft flexes come usually in three different flex profiles, Regular(R), Stiff(S) and Extra stiff (X) with each flex profile having a number of different weights depending on your swing characteristics e.g. if you load the shaft on the downswing like Sergio Garcia you would benefit from using a heavier shaft, or say your tempo is  similar to that of Brandt Snedeker (who in the past has played a driver shaft with a weight of 55 grams) then it would fit you better to play a lighter shaft.

But keep in mind, just because you are playing a heavier shaft does not mean you must play it at a stiffer flex however as shaft weight primarily affects ball flight in terms of height  and shaft flex affects the dispersion of your ball flight.

So Does it actually make a difference ?

It would be best to visit your local PGA golf pro and get properly fit for the shaft flex that suits your swing. Contact

and see what we have to offer.