With the 2018 Ryder Cup almost here, its time to look back on the top 5 editions of the historic event. 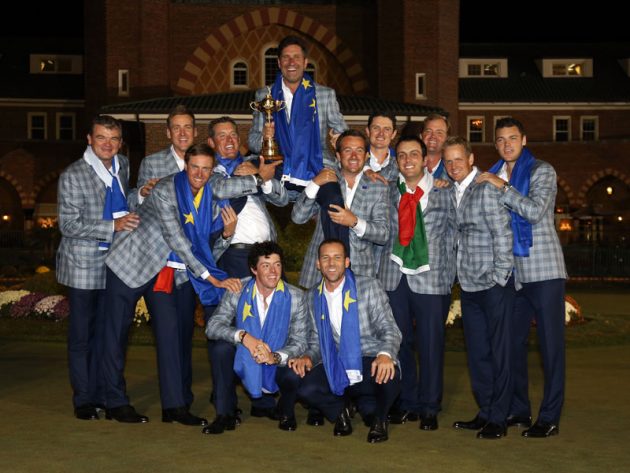 This is arguably the greatest Ryder Cup there has ever been. With the United States dominant over the first two days play, Ian Poulter put himself into the pantheon of Ryder Cup greats with birdies on the last five holes in his four ball match with Rory McIlroy against Zach Johnson and Jason Dufner. He helped secure a massive point for Europe which put the score at 10-6 with the Sunday singles to come.

The next day, Europe came out firing, winning the first five matches. Justin Rose’s match against Phil Mickelson in particular was huge for Europe as he birdied the last two holes with two brilliant putts to win 1up. Sergio Garcia, Lee Westwood and then Martin Kaymer also produced points with the German holing the winning putt on the 18th to win the Cup. It was an incredible come-back which was even more poignant given the death of Spanish great Save Ballesteros a year previously. Captain Jose Maria Olazabal was overcome with emotion on that momentous day. 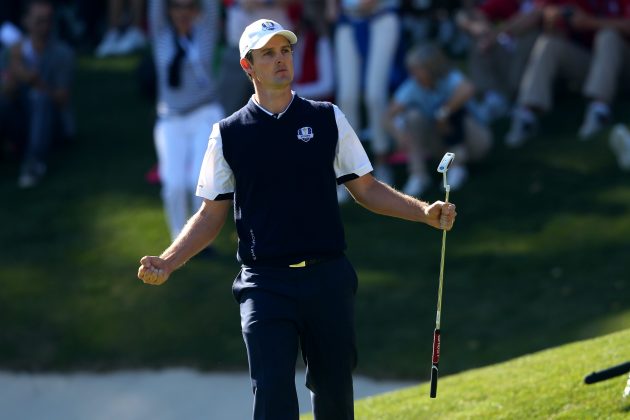 Rose’s monster putt on 17 was a huge moment. He then birdied the last to beat Mickelson (Getty Images)

In 1999, the United States pulled off a come-back of their own. Sure, in terms of crowd behaviour this edition probably wasn’t the Ryder Cups finest moment. Additionally that moment between Justin Leonard and Jose Maria Olazabal caused controversy but both of those things should not take away from what was an epic comeback.

Down 10-6 heading into the singles the Americans won the opening 6 matches by significant margins. Padraig Harrington stemmed the tide but Steve Pate and Jim Furyk won both their matches to put them up 14-12.

Justin Leonard sealed the half point American needed with a 40-foot putt on the 17th against Jose Maria Olazabal. The Americans celebrated to an embarrassing degree given the Spaniard still had a putt to halve the hole. Alas, he missed and the Americans secured the Cup. 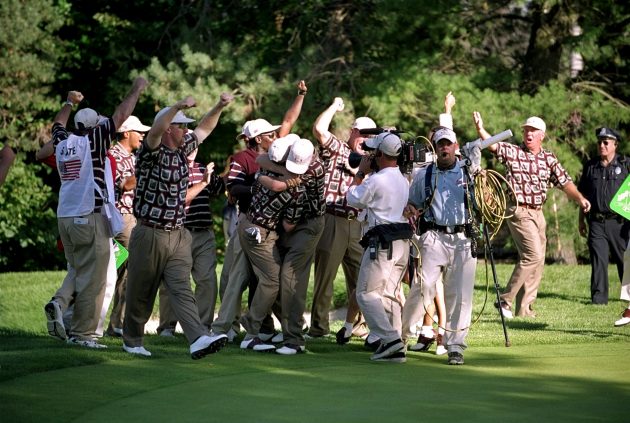 Plagued by weather issues, the 2010 event went into Monday of next week as the torrential rain had disrupted play. Going into the final day Europe led 9.5-6.5 but America ground their way back into the match and eventually the event came down to the anchor match between  2010 US Open winner Graeme McDowell and Hunter Mahan.

That match went down to the wire too with the birdie putt holed by McDowell on the 16th being a huge moment for his team. On the next, the pressure proved too much for Mahan as he fluffed his chip shot. McDowell won 3 & 1 and the Europeans took the Cup back once again. 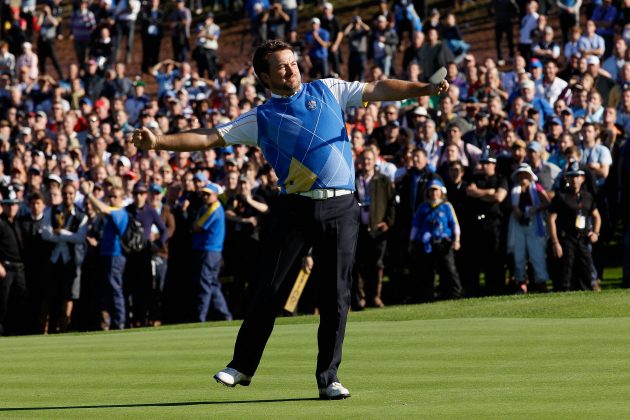 Put simply, this was Europe’s first ever win on American soil and produced some memorable moments throughout. First, during the final day singles Ben Crenshaw snapped his putter so had to play the remainder of his match with Eamonn Darcy with his three-iron as his putter. Second that match proved to be crucial with Darcy securing his first point from 9 attempts on the 18th green. It was this match which stemmed the tide of an American comeback. Seve Ballesteros sealed the deal in his match later that day.

The final memorable moment came in European celebrations with Jose Maria Olazabal dancing his famous jig on one of the greens. 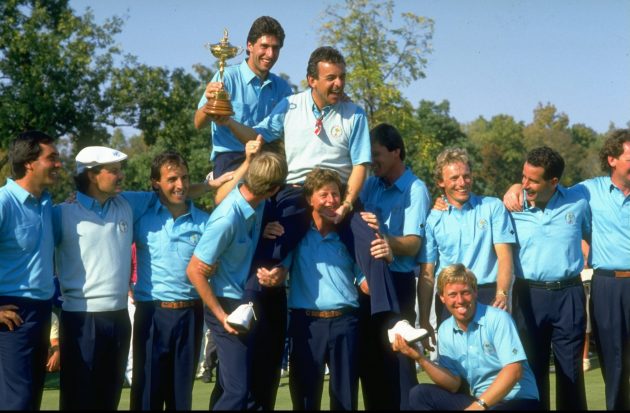 In terms of acts of true sportsmanship, the 1969 Ryder Cup has no competition. With the scores tied at 15.5 points each Jack Nicklaus and Tony Jacklin Nicklaus made a 5 foot putt on the last leaving Jacklin with a couple of feet to tie. Nicklaus picked up the Englishman’s ball marker and said “I don’t think you would have missed it, but I wasn’t going to give you the chance, either.”

Sam Snead, the American captain was reportedly livid, but the moment has gone down as one of the greatest moments in the event history. 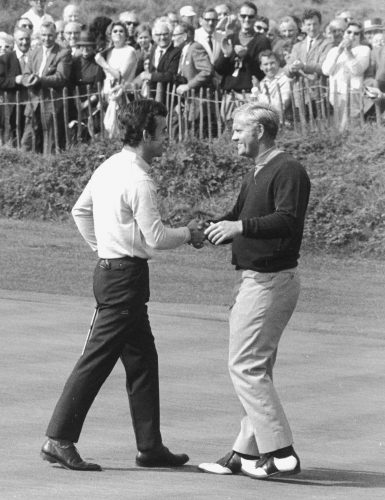 The 2018 Edition of the Ryder Cup gets underway on the 28th September and, if recent years are anything to go by it promises to be one of the best battles yet !

Francesco Molinari was the model of consistency on his way to winning the claret jug, becoming the first Italian major champion ever.

The Italian was the last man standing after a thrilling final round at Carnoustie.

And as Tiger Woods, Rory McIlroy and Jordan Spieth all found their troubles, Molinari was a model of calm consistency.

At no point during a fantastic final round with two birdies and no bogeys did he ever lose control of his golf ball.

The former Nike staffer has gradually switched into mostly TaylorMade gear over the past couple of years with a few exceptions.

Molinari is regarded as being one of the most consistent drivers of the ball hitting around 70 per cent of fairways with his TaylorMade M4 driver.

We had seen him using the M1 model up until the M4 was released at the start of the year.

He then moves into the P750 model which are one of the most popular among European and PGA Tour players.

Molinari has the TaylorMade Milled Grind wedges  including the Hi-Toe 60˚ which the likes of Rory McIlroy, Jon Rahm and Dustin Johnson are using.

After signing a deal with Bettinardi at the start of 2018, Molinari had put their BB56 model into play but made a switch at the Players Championship.

The model he used to win at both Wentworth and the Quicken Loans National, and now The Open, is the Dass BBZero…

Despite a bag full of TaylorMade clubs, Molinari opts for the Titleist Pro V1x golf ball.

Driver: TaylorMade M4 8.5* (Mitsubishi Tensei White 60x) – Click the link to play the same driver shaft as the 2018 champion golfer of the year ! Open championship week is finally here again and this years instalment comes from Carnoustie golf links on the north west coast of Scotland. Carnoustie has hosted the open on 7 previous occasions, the last of which coming in 2007 when Padraig Harrington triumphed over Sergio Garcia in a playoff.

One of the most memorable finishes in open history took place at carnoustie in 1999 when Frenchman Jean Van De Velde, needing a double bogey 6 at the last to take the claret jug, made a triple bogey 7 to fall into a 3 man  playoff with american Justin Leonard and  Scotland`s Paul Lawrie which he would go on to lose after birdies by Lawrie on the 17th and 18th. Paul Lawrie in 1999 with the claret jug

Carnoustie has a reputation for being one of the toughest venues on the open rota and this was never more evident than in 1999 when the halfway cut, after two rounds of terrible weather conditions fell at 12 over par. This resulted in the course gaining the nickname “carnasty”.

The key hole for the week has to be the 18th, which at 444 yards playing into a prevailing wind is one of the toughest finishes in professional golf. Four par 4`s at the 18th for the week would most likely gain you a couple of shots on the field. As for the rest of the course playing at a par of 71 for the championship and a total yardage of 7,421 yards it is as stern a test of links golf you will find and the champion golfer of the year come the end of the week will have for sure earned every bit of that title.

The coverage starts at 6:30am on Thursday 20th july and if i was you i would set your alarms bright and early as this years open has the making of one of the most exciting in years ! It was a big weekend in Hilton Head S.C  for Satoshi Kodaira as he rallied from 5 strokes back to shoot 66 on the final day at the R.B.C Heritage and get into a playoff with si woo Kim the 2017 players champion. After both making par at the first 2 playoff holes, Kodaira, who has won a total of 6 events on the Japan Golf Tour  struck an 8 iron to 24 feet on the 17th hole at harbour town and dispatched the putt for his first PGA Tour title in just his 15th start.

Kodaira’s bag is not one you see from a typical PGA Tour player as it is nearly filled with sticks from PRGR, which is a big brand in Japan, but known for little more in the U.S. than signing Corey Pavin at one time and producing pretty good utility irons. Now as Kodaira prepares to play the PGA Tour full time, he has an opportunity to raise awareness of the brand on a weekly basis going forward.